In cold regions, ice formation is known to be an important driver of rock fracturing and commonly referred to as frost weathering. The formation of ice in rock induces pressure variations in rock pores and cracks, which can cause damage near the surface as well as up to a depth of several meters. This process may be crucial for the slow preconditioning of rock fall from warming permafrost areas, through the formation of ice-filled cracks. Most knowledge about the associated processes stems from theoretical studies [Walder and Hallet, 1985] or laboratory experiments [Murton et al., 2006]. However the transfer of corresponding insights to natural conditions, involving strong spatial and temporal heterogeneity, is nontrivial.

A powerful technique to track the evolution of damage in rock consists in measuring acoustic emissions (AE). AE signals are transient elastic waves generated by the release of energy during rapid local changes of inelastic strains in solid materials. These events are accompanied by damage increase or to shearing of existing fractures [Scholz, 1968]. AE monitoring has been used at the rock sample scale in laboratory studies, and under natural conditions to monitor seismicity and rock bursts in mines and tunnels as well as slope instabilities. 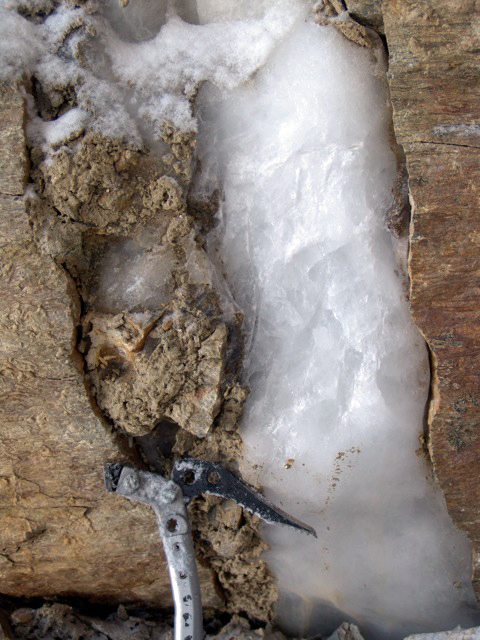 n April 2010, we performed a pilot experiment monitoring AE signals at the surface of a south-facing rock wall, near the Jungfraujoch research station (3500m, Switzerland), during four days. During the measurement period, the rock surface encountered large temperature cycles, from -5 to +10 degrees Celcius, and diurnal thawing penetrated about 20 cm deep in the rock which remained continuously frozen at greater depths.

Listen to a sample of the recorded AE signal, converted to audible sound, playback speed was multiplied by hundred (raw data are in the ultrasound frequencies, i.e. kHz).

Three key findings were revealed by the data acquired during this experiment: 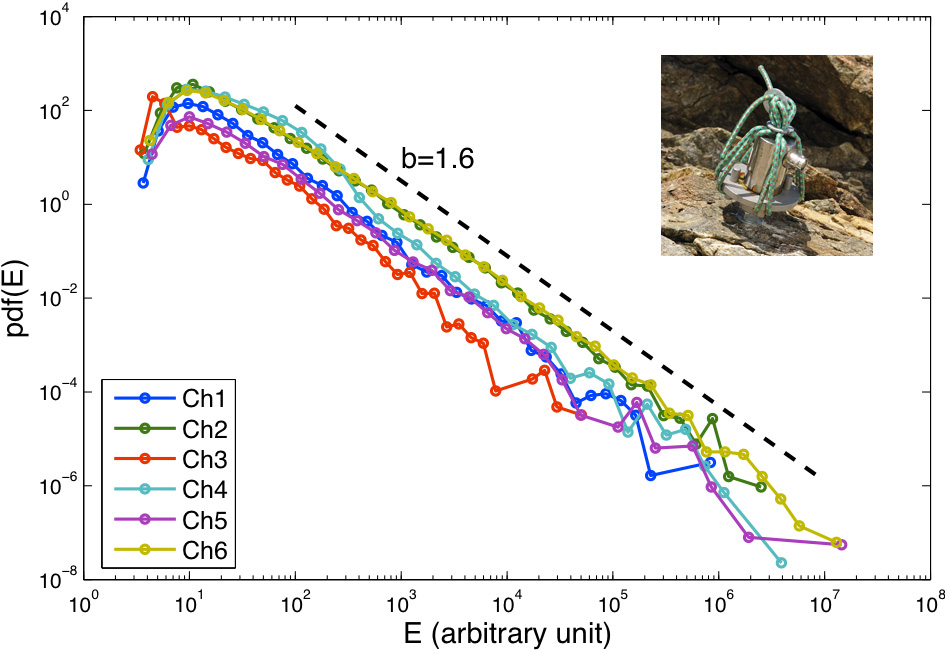 The probability distribution function of AE event energy recorded during the pilot experiment follows a power law. Inset: temporary installation of an AE sensor on the rock surface

Design of an AE measurement assembly

To better understand freezing-induced rock damage, continuous AE monitoring and the ability to estimate source depths of events are desirable. We expect the investigation of diurnal and seasonal cycles as well as rock in an advanced stage of pre-fracturing to be important for the robust transfer of theoretical insight to field conditions. In order to achieve this, we have built an AE measurement assembly specifically designed to acquire a reliable, multi-year time-series in steep alpine rock-walls.
This measurement assembly consists of a casing, which accommodates a piezoelectric sensor (R6alpha, Physical Acoustics Limited, UK) to record AE in the frequency range 1-150 kHz. The sensor is pressed down on the bottom part of the casing using a spring. The bottom part of the casing is made of a four-mm thick aluminum plate. A lid with waterproof cable port completes the surface end of the casing. The assembly is glued to the bottom of a borehole only, and the remaining space sealed with a 5 mm-thick layer of Geo-Gel (a two-component polyurethane-resin) injected into void between borehole and casing. This construction ensures a good transmission of AE signals to the sensing element, through the aluminium plate at the bottom of the casing, while spurious AE events are reflected/damped by the other parts of the casing.

Four copies of the AE-measurement-assembly were installed in a rock-wall at Jungfraujoch. The strategy chosen for this deployment was to equip two contrasting sites with measurements at two different depths, each. Boreholes were drilled at differing angles, aiming at a final alignment of the sensors normal to the rock surface. This reduces the disturbance caused by the boreholes in the rock closest to the AE sensors. The sensing parts of the casings are located at 10 and 50 cm depth. The two sites equipped are only ten meters apart and show similar general characteristics: southeasterly slope aspect, 50-70 degrees steep rock wall of granitic gneiss. The main difference between these two sites lies in the availability of liquid water: while one site is on a rather dry spur-like feature, the second site is in a gully-like depression that collects melt-water from the surrounding snow patches. In addition to the AE sensors, two probes to measure temperature and relative moisture (by capacitance) at different depth are installed at each site. Data are transmitted though a wireless sensor network customized for operation in harsh environments.

Sketch of the continuous monitoring sites deployed at Jungfraujoch 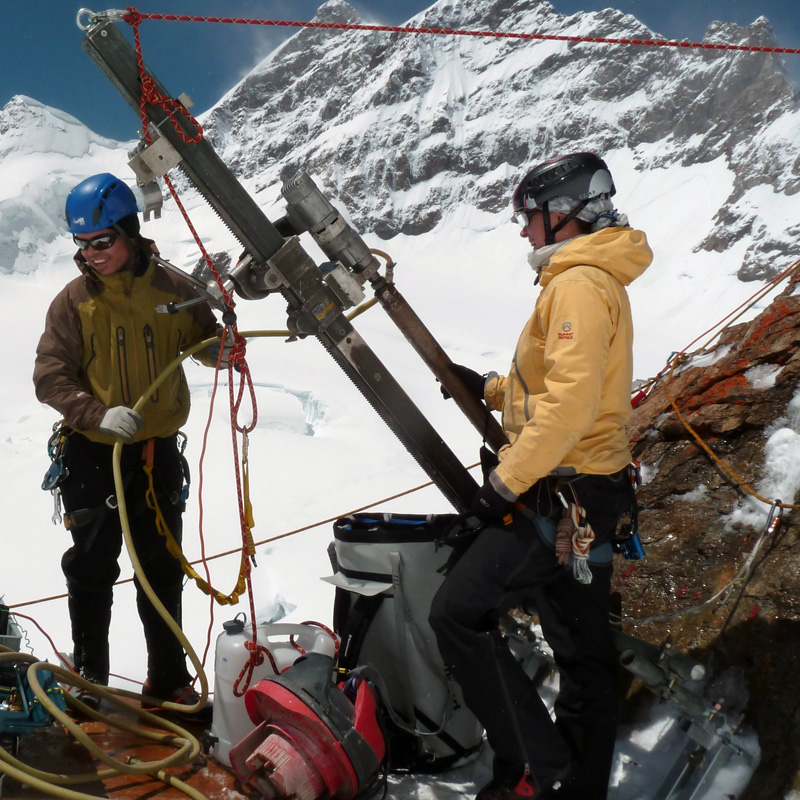 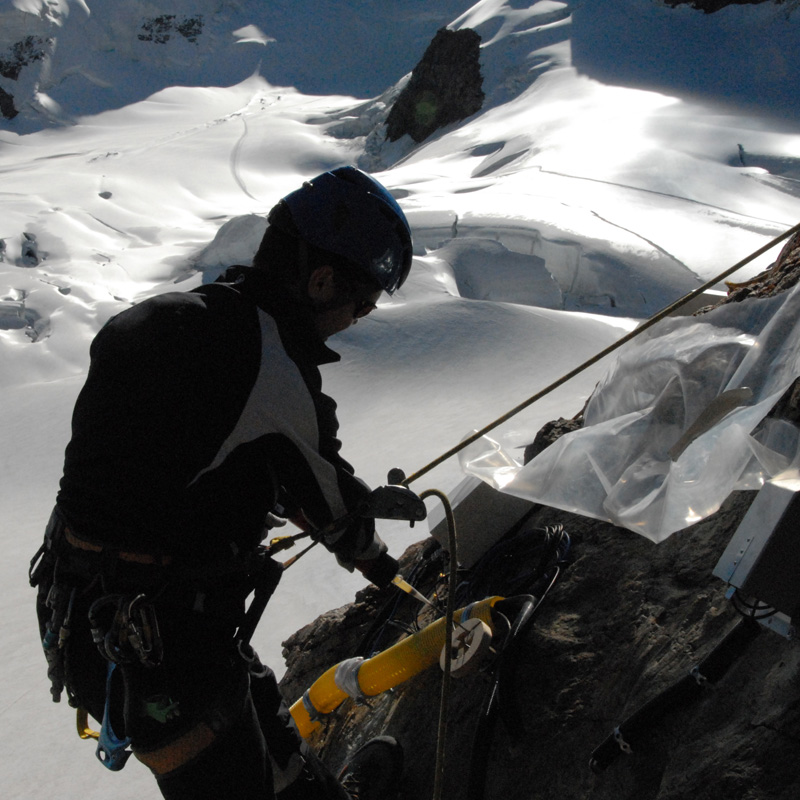 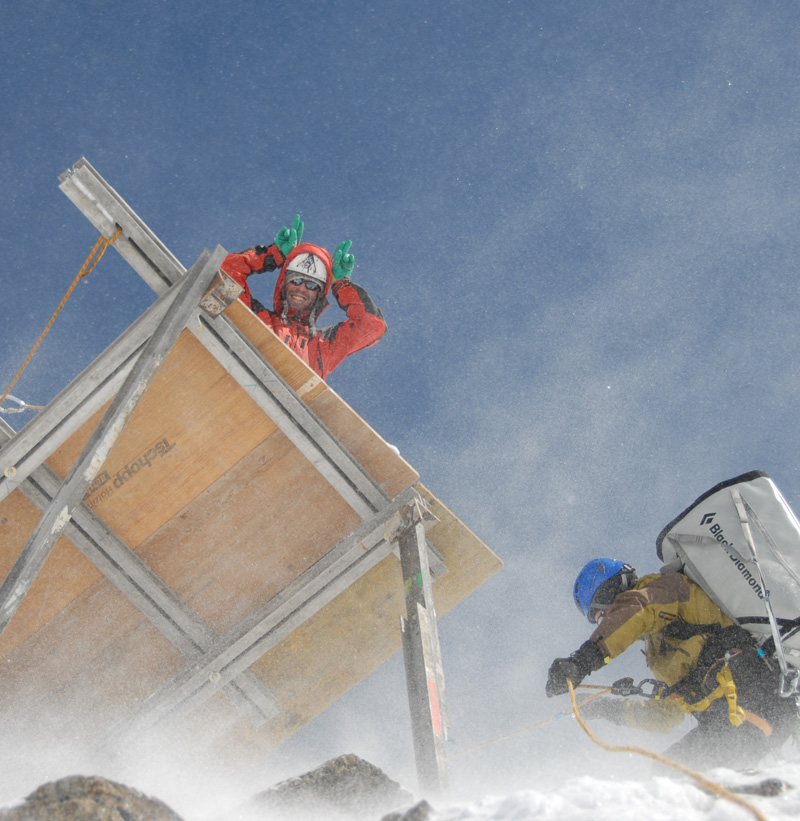 The research presented here was made possible by the support of: